With the impact of COVID-19 worldwide, Nepali media, media houses and journalists also faced many difficulties. In capacity of the regulatory body, Press Council Nepal decided to address the grave situation and suggest the government to take action. For this PCN formed an 11-member taskforce, under the leadership of its Acting President, to interact with the concerned stakeholders and to conduct a study on the impact of COVID-10 on Nepali media sector. This report is prepared by the taskforce after consultation with Federation of Nepali Journalists (FNJ) and other professional organizations of journalists as well as study in all the seven provinces through different mediums.

Journalists in Nepal are working responsibly fighting the risk of COVID-19 during the lockdown imposed due to the pandemic. In such a situation, PCN could not stay silent towards the hardship being faced by the journalists. On the one hand PCN monitored the media content regularly and took action against the media who disseminated disinformation, rumors and against the Journalist Code of Ethic, while on the other it supported the journalists by distributing safety materials including press jackets.

The Press Council Act, 1991 gives rights to the PCN to advice the government. Based on that, PCN has prepared this report to give suggestions. The content of the report is in the same form as the suggestions by stakeholders, who participated in interactions, reports received from around the country and monitoring conducted by PCN. PCN is grateful towards, who worked on this report and contributed with their expertise.

01. Nepali media sector is also facing the adverse impact of the global pandemic caused by Corona Virus (COVID-19). Most of the newspapers had to shut down during the lockdown imposed by the government from March 24, 2020 to July 21, 2020. Distribution of newspapers was affected as there was widespread concern that Corona virus can transmit through paper. Even the published newspapers could not be distributed.

03. Due to the closing down of newspapers and printing presses, workers in the media sector including journalists, employees of media houses, distributers, stationers, wholesalers and retailers were affected directly or indirectly. Revenue from advertisement and distribution of newspapers came down to near zero.

04. The Gorkhapatra Daily continued its regular publication despite the lockdown. But the daily advertisement revenue, which was near about 3 million decreased to about 500 thousand. Annapurna Post and Naya Patrika Daily also did not stop their regular publication, while Kantipur closed its publication on March 31, 2020 and restarted in April 6, 2020.

05. As of August 7, 2020, the number of radio stations having broadcasting license was 1,127, among them about 700 were in regular operation. Among them who are in regular operation, about half of them, i.e. about 350, were also broadcasting online. FM radio stations in Nepal are facing financial crisis due to COVID-19 pandemic and lockdown. According to a study conducted by Association of Community Radio Broadcasters (ACORAB) among 224 radio stations, regular income of radio stations has decreased by 75%. Revenue from advertisement, notices and program productions could not also be collected due to the lockdown.

06. 81% of the community radios did not have any change in the responsibilities and benefits of their employees and volunteers, while 19% made changes in mutual agreement. FM radio stations conducted campaign to broadcast public service announcements to prevent spread of Corona virus infection. 92% of the radios have broadcasted information on precautions to prevent from the risk of Corona virus infection. At a time, when schools are closed and students are at home, radio stations are broadcasting teaching/learning programs based on school curriculum of different grades. 58% of the radios are broadcasting such programs.

08. As the accrued revenue through advertisement, notices and program production could not be collected due to lockdown, payment of staff salary, electricity expenses, telephone expenses, house rent and annual renewal royalty was difficult for the radio stations.

10. The journalists are working day in and day out to communicate information and voices of health professional, experts, government officials and people’s representatives as well as information regarding relief distribution to the people through dialogues, talk shows, corona specific programs, etc.

11. The National Television Broadcasters Association has categorized the impact on the cable televisions based on the time frame. According to them the four months between Mid-march to Mid-July was the phase of total loss, Mid-July to Mid-January was of partial loss. They also project that the duration of one year between January 2021 to January 2022 as the highly affected period. They have estimated that during this period one cable television will lose more than 17 million rupees.

12. National satellite and terrestrial television broadcasters are expected to lose one third of their annual revenue during this period. It is estimated that the loss for television stations can be between 10 million to 40 million rupees per month. On the other hand, the regular expenditure on production, distribution and marketing need to continue as earlier.

13. The traditional media like print, radio and television also have started to distribute their products through online medium lately.

14. As of August 7, 2020, the Department of Information and Broadcasting record shows that 1995 online media were registered. While at the same time the number of online news media listed at PCN was 2185. Along with the increase in number of online media, it is needed to work towards their quality enhancement.

16. Revenue generated from Google Ads and Instant Articles through Google and Facebook are the other major sources of revenue generation for online media. But, although the users of online media has increased, Facebook and Google have reduced the amount of payment, which already has created financial crisis among online media.

17. If the Federal Government and its agencies like departments, offices and other entities use online media for dissemination of their notices and information, it could be effective in survival of online media. Online media operators complain that there is not the required understanding at district or local levels that online media too are news media as newspapers and that advertisement on online media can be more productive. Operators, who were planning to operate online media professionally in an organized way feel that their plans were affected by the pandemic.

18. Although most of the newspapers were closed down during the lockdown, most of them started re-publication since mid of June 2020. As the journalists and workers at weekly newspapers have to work mostly two days a week, there is a need for dialogue with stakeholders while implementing Working Journalists Act at those media houses.

19. As per the available reports, 23 journalists were infected with COVID-19 in Parsa, Bara, Dhanusha, Udayapur, Morang, Kapilvastu and Banke districts, among them 18 have already recovered and started to work.

21. During the time of pandemic, media is also one of the necessary services, as they disseminate correct information and news to the people. Hence, the contribution of media towards nation and citizens needs to be recognized the sector must be treated duly.

22. Advertisement Regulation Act, 2076, proportional advertisement distribution and clean feed policy need to be implemented immediately as well as the Advertisement Board should be formed.

24. Special economic package to disseminate information on disaster and COVID-19 pandemic should be declared.

25. Provision for reporting fellowship through PCN, FNJ and other professional organizations of journalists should be made.

26. Provision of health insurance to the working journalists needs to be done immediately.

27. While giving license to the media houses, provision should be made to deposit certain amount to a fund, which could be used to pay the salary of journalists in future, in case the media house does not make such payment.

28. Different sectors including education and medical, for which advertisement was prohibited in the past and those, ceiling was imposed on the ratio of advertisement like banking, insurance, etc. needs to be reopened. 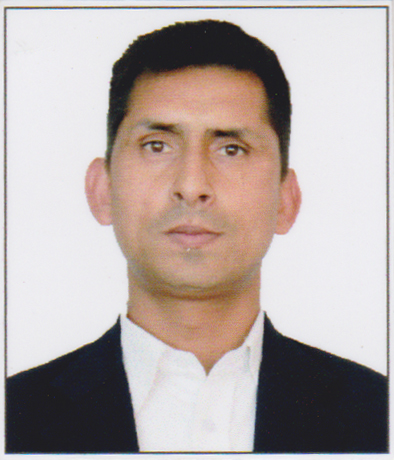 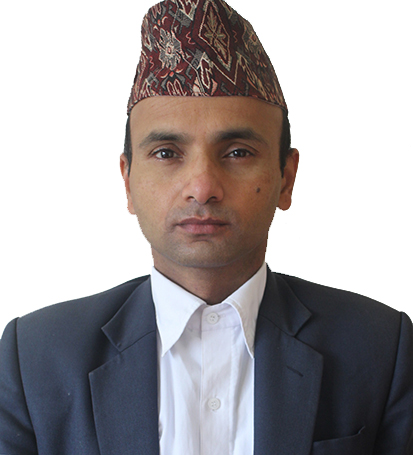 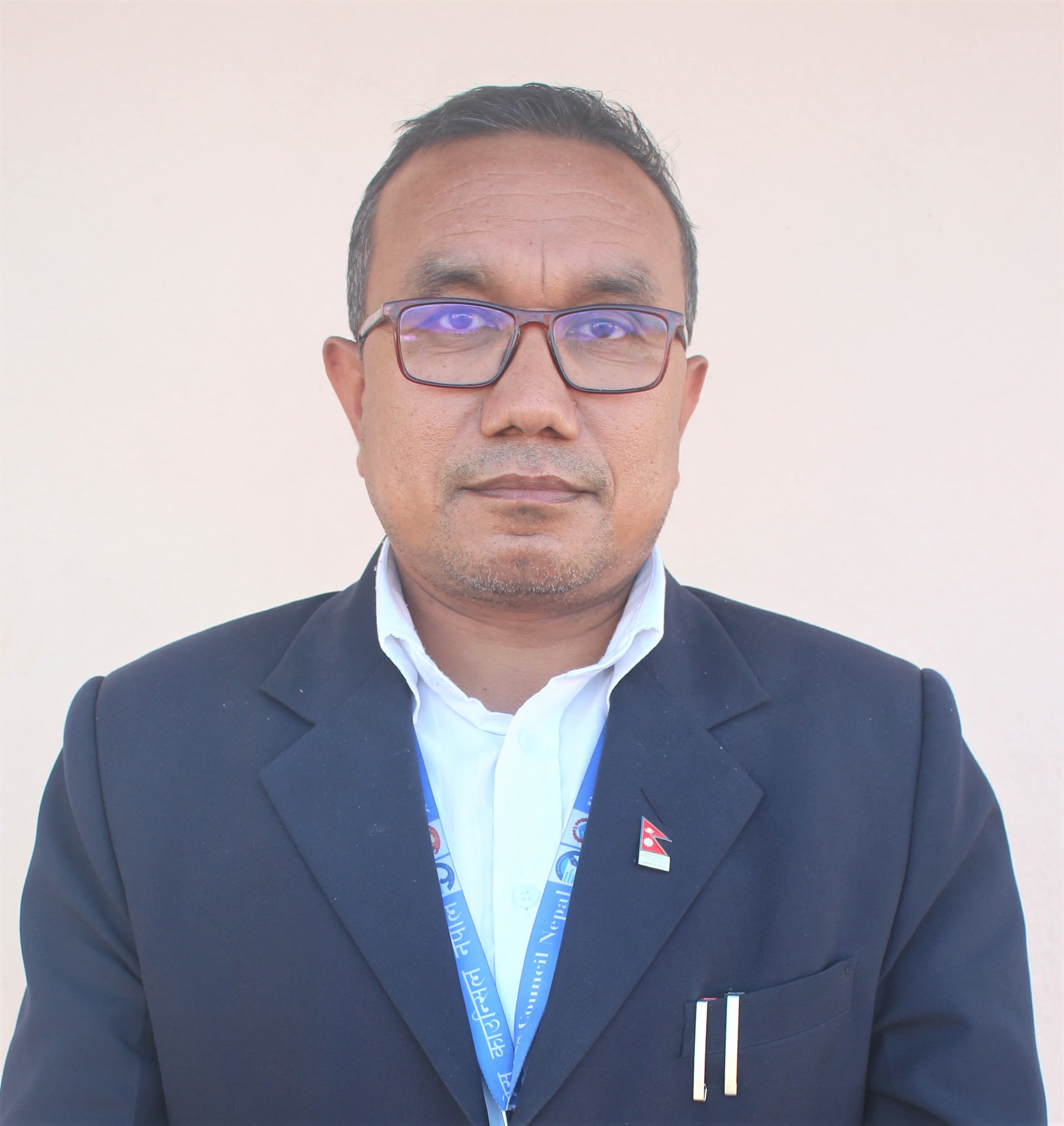 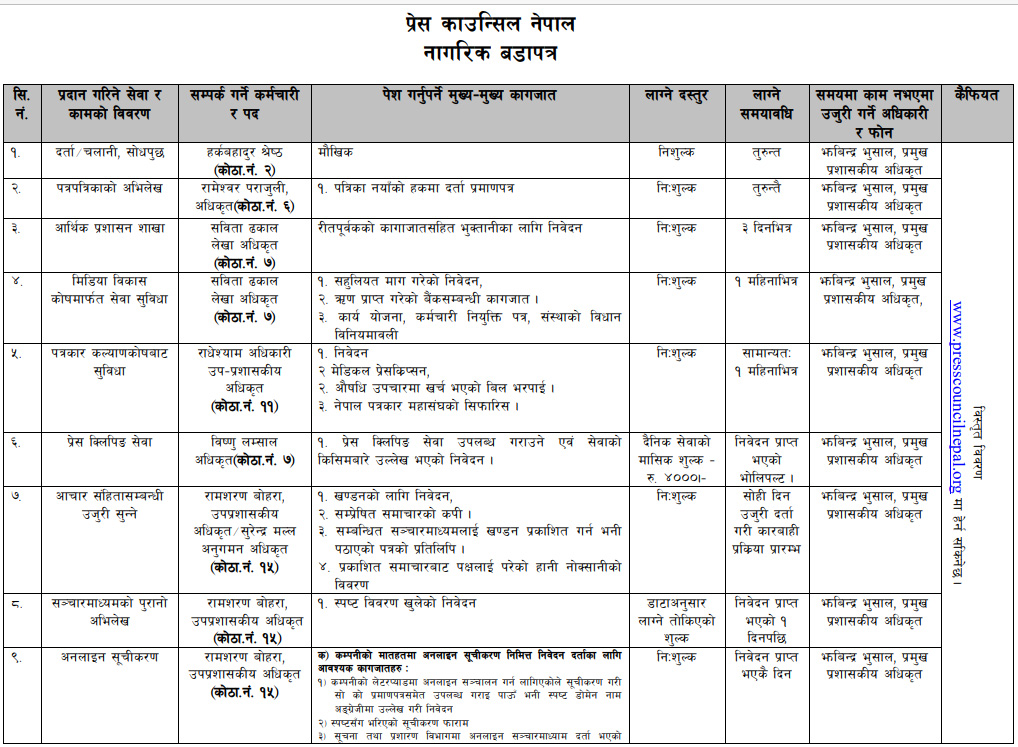 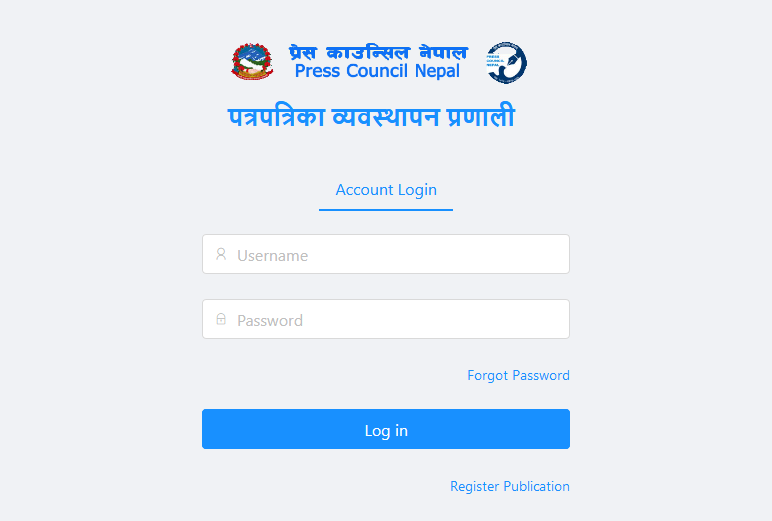